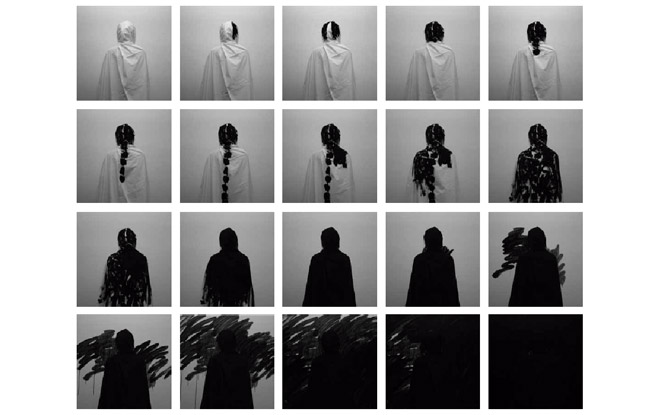 The Shaikh Ebrahim bin Mohammed Al Khalifa Center for Culture and Heritage is pleased to announce a photography retrospective by artist Waheeda Malullah.  Little Voice opens at the Bin Matar House on 28 January 2016 at 7pm.

Much of Waheeda Malullah’s work is characterized by playful exploration.  Reverberating with childlike curiosity, her artworks see the world through children’s eyes, echoing their innocence and hopes for the future.   Malullah’s work in particular examines the world of girls and women in her community, their cultural and religious norms, and the rules and systems that govern their life.

Whether as subject matter, actor, object or literally the canvas to her brushstrokes, the female body is central to Waheeda’s work.  Bodies wrapped in white canvas or abaya clad figures inhabit her images.  The black abaya is just that – the traditional piece of clothing worn by women in Malullah’s community and at the same time functioning as compositional element of form and contrast.

Waheeda Malullah produces her artwork in extensive photographic series, from which she selects images to form the core of a project.  Images are usually presented in a stop motion format, a pictorial story unfolding from beginning to end.  A process of conceptualization through hand sketches precedes the execution of any artwork.  Artistic vision, thematic and compositional elements are developed prior to the commencement of any shoot. Once in the field, the artist allows for the spontaneity and involvement of actors from the local community, resulting in unexpected outcomes at times yet also a sense of immediacy and authenticity.

It is in the dualistic nature of Waheeda Malullah’s work where the artist’s appeal and success ultimately lies.  A strong conceptual approach countered by spontaneity in execution.  A playful innocence reverberating with deeper issues regarding the role of women, dress and religion in a traditional community.  Waheeda Malullah navigates these waters with a sense of ease, insight and joy.

Waheeda Malullah is a visual artist who works in multiple media with a focus on photography and video. Born in 1978,Waheeda Malullah lives and works in Bahrain. She holds a degree in Graphic Design from the Regional Institute for Advertising and Marketing, Bahrain.

Waheeda Malullah participated in residencies at The Townhouse Gallery (Cairo, Egypt, 2005), The Delfina Foundation (London, UK, 2008-2009), and The International Studio & Curatorial Program (New York, USA, 2013).  In January 2013, Malullah won the Al Dana Prize, the first prize at Bahrain’s 39th Annual Fine Arts exhibition and in 2015 she received Bronze Palm Award for Photography at Visual Arts Forum, KATARA in Doha. Waheeda Malullah’s works can be found in the collections of the institut du monde arabe and the British Museum.

The exhibition Little Voice will be held at the Bin Matar House in Muharraq.  The exhibition previews on Sunday, 28 February 2016, at 7pm and runs until 7 April 2016.

The opening hours of the Bin Matar House are Saturday to Thursday from 9am to 1pm and 4 to 7pm.

The Bin Matar House is an old traditional Bahraini building and one of twenty-two houses restored by the Shaikh Ebrahim Center for Culture and Research in Muharraq and Manama, Bahrain.

For further information on the Shaikh Ebrahim Center and the Bin Matar House, please visit our website, www.shaikhebrahimcenter.org.