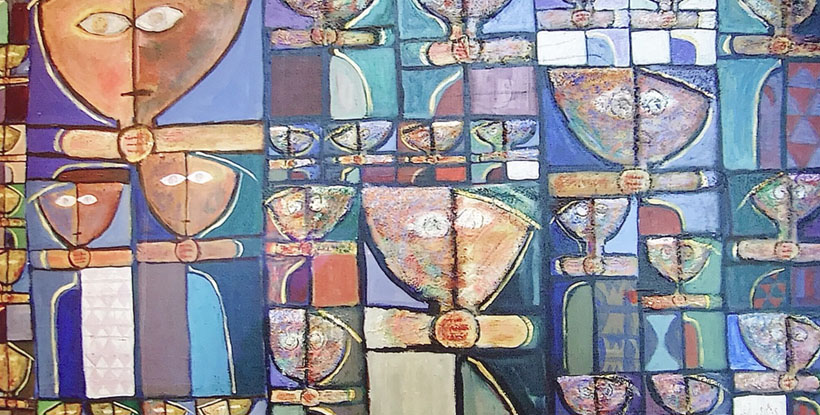 The Shaikh Ebrahim bin Mohammed Al Khalifa Center for Culture and Research is pleased to announce the second iteration of its SPOTLIGHT SERIES, a series of annual exhibitions highlighting the early masters of the modern art movement in Bahrain.

The exhibition SPOTLIGHT SERIES – Nasser Al Yousif focuses on the achievements of a true pioneer of the modern art movement in Bahrain. It brings together works by the artist from the collection of the Bahrain National Museum and the extensive collection held by the artist’s family that have not been seen together by the public in decades and never in the framework of a retrospective. The exhibition will highlight Nasser Al Yousif’s artistic practice in multiple media, spanning painting, drawing and the print medium, as well as his pioneering role in establishing and furthering the visual arts in his native Bahrain.

A central aspect of the exhibition is the detailed documentation and cataloguing of over 600 artworks, which will be published in the form of a catalogue accompanying the exhibition.

The Spotlight Series is a collaborative effort of the Shaikh Ebrahim Center with the Bahrain National Museum and the family of Nasser Al Yousif.

About the SPOTLIGHT SERIES

The Shaikh Ebrahim Center launched the SPOTLIGHT SERIES in 2016 to highlight the achievements of the masters of the early modern art movement in Bahrain. The aim is to bring together artworks from multiple collections and to document and present these works that have previously not been accessible to the public.

In 2016, the SPOTLIGHT SERIES was launched with “The Last Supper” series by Bahraini painter Yaqoob Yousif Qassem.

The exhibition SPOTLIGHT SERIES – Nasser Al Yousif will be held at the Bin Matar House in Muharraq. The exhibition previews on Sunday, 8 October 2017, at 7pm and will run until 31 December 2017.

The opening hours of the Bin Matar House are Saturday to Thursday from 9am to 1pm and 4 to 7pm. The Bin Matar House is a Bahraini heritage building and one of twenty houses restored by the Shaikh Ebrahim Center for Culture and Research in Muharraq and Manama, Bahrain.

In honor of the artist Nasser Al Yousif, the Shaikh Ebrahim Center has organized a one day symposium on 7 October 2017, titled “Writing Narratives: Documenting the art production of modern Arab artists.” The symposium will focus on and debate questions around the development of art historical narratives, and the use of archives and documents. The program will contextualize the SPOTLIGHT SERIES work, and allow an exchange on best practices. A key highlight will be the screening of the “ Triumph of Insight,” a documentary movie on Nasser Al Yousif produced by Mahmood Al Yousif, followed by a panel discussion. Curated by Professor Nada Shabout (University of Northern Texas), the program brings together eight scholars in the field of Modern Arab art.
The symposium will take place at the Shaikh Ebrahim Center Auditorium on Saturday, 7 October 2017.

Participation by registration at info@3.6.46.52

For general information on the Shaikh Ebrahim Center and the Bin Matar House, please
visit our website, www.shaikhebrahimcenter.org